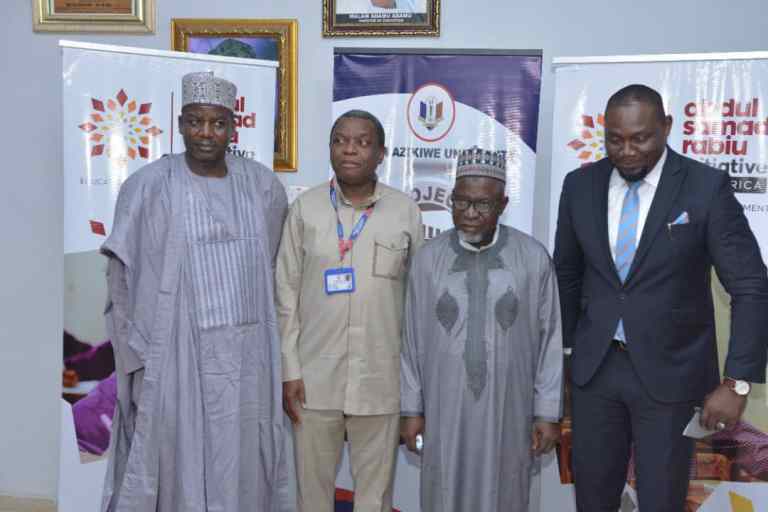 It was jubilation yesterday when Nnamdi Azikiwe University Awka received a grant of One Billion Naira (N1B) from a Non Profit Organization, Abdul Samad Rabiu, ASRAfrica Initiative for the construction of an international Students Center www.odogwublog.com reports.

Receiving the grant , the Vice-Chancellor of Nnamdi Azikiwe University, Awka, Prof Charles Okechukwu Esimone, FAS expressed gratitude to the donors of the grant reiterating that the mega Students Center in the institution when completed would be the first and best of its kind in Nigeria in particular and Africa at large.

The Vice-Chancellor who made the statement at the Council Chambers of the institution on Friday, while receiving the grant said the Students complex would house the Students Affairs unit, International Students centre, centre for Council and Career Development, Acting theatre, the SUG secreatriate including their respective arms, among other features.

Prof Esimone who emphasized that the institution is blessed having been found worthy to receive the award grant for the construction of the wonderful edifice, noted that: “the students are the end users of the project of the university which would be first and best in Nigeria and Africa.

Speaking at the event, Chairman /Founder of ASRAfrica Initiative, Alhaji Abdul Sama Rabiu represented by a former Minister of Health, Dr. Aliyu Idi Hung, said the project was borne out of aspiration to contribute his quarter to the growth and development of the country.

According to him, the idea “was to set aside fund for intervention in the area of education, health and social development in Nigeria and Africa in general.

“The Chairman has a commitment of setting aside One Hundred Million Dollars annually of which Fifty Million Dollars is set aside specifically for Nigeria and the remaining $50m for the rest of Africa.

“In part of what we have done so far, this is the last lap of the university intervention of  N1billion development grant to one institution in each geographical zone of the country.”

He assured that the One Billion Naira project would commence in a couple of months and commended the institution for their commitment on the project, even as he promised quick completion upon take-off.

He reminded that the founder is a committed business man who is pained in the paucity of funds for education sector of the country.

According to him, such situation has hindered the required growth and development of education in the country.

In his remarks, the Project Managing Director, Mr. Ubon Udoh emphasized that the project would take off as soon as the university management can constitute a team that would allow for interaction to fine tune the design to achieve the desired goal.

He explained that the group utilized the NUC ranking, the global university’s ranking as well as developmental strides in the annual selection of the benefitting universities across the country.

The Pro-Chancellor and Chairman Governing Council of Nnamdi Azikiwe University, Prof. Sulyman Kuranga said the project would serve as a reward to students who he said had maintained peace and harmony in the campus.

While he commended the foundation’s concerns for the future of the students even in a period of harsh economy, he said the project would rate as the first and best among universities in Africa.

Prof Kuranga who emphasised the university’s rich core values of uniqueness and things that are special, stressed that the project would be accessible to the university community irrespective of gender and would stimulate a solid learning environment.

Explaining the key components of the project, Arc Okey Ezeobi noted that the mega recreation centre was designed such that students would learn how to live a civilized life. “Everything that would make the students feel good and complete would be domiciled in the centre.”

He emphasized that the project would house various centres including a multipurpose hall, acting theatre, E- library,  hallway, among others that would help the students achieve their dreams.

Also reacting, the Unizik Students Union President, Comrade Ani Chukwuemeka said the initiative, when completed, would be a plus to the students of the university. He also said it would go a long way to serve the students and the university community at large.

www.odogwublog.com informs that the Abdul Samad Rabiu Africa Initiative, ASR Africa, is the brainchild of an industrialist, philanthropist and Founder of BUA Group, Abdul Samad Rabiu. BUA has a cement manufacturing company among others. 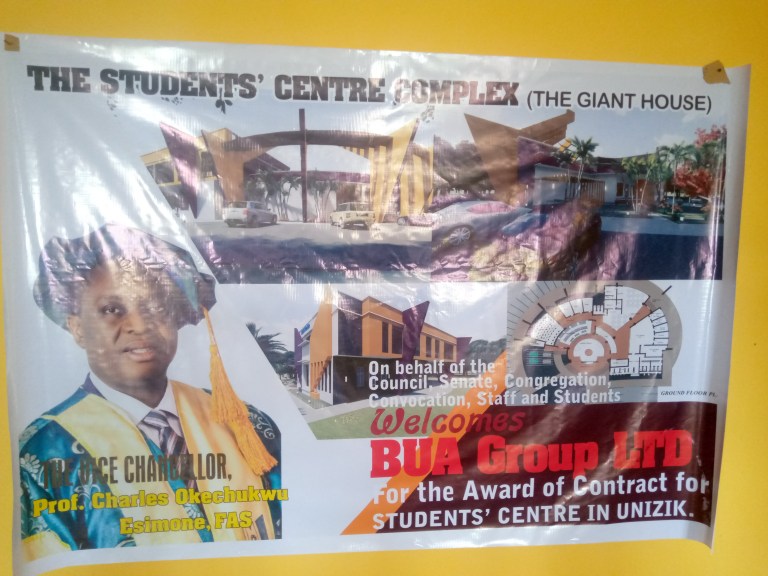