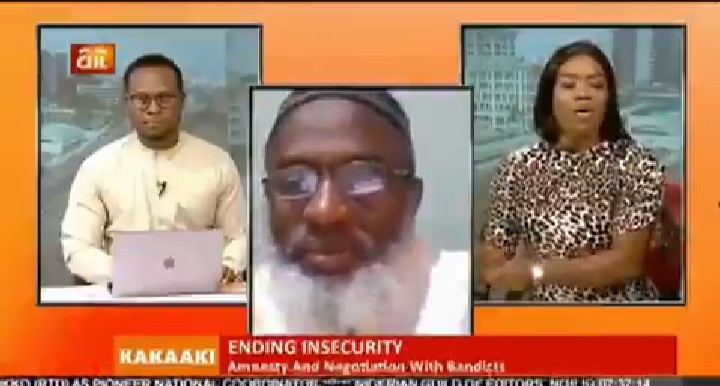 Sheikh Gumi has come open to defend the rampaging bandits that are kidnapping and causing excruciating pains to Nigerian citizens.

This, he made bare during an Interview granted by AIT in their morning “Kakaaki” show.

Sheikh Gumi is back on TV eloquently but shamefully defending bandits and terrorists before millions of nigerians.

No arrests. No investigations. No sanctions for such interview. But when an Igbo man makes case for Biafra, he must be hunted and jailed.

Are we truly One Nigeria? https://t.co/5XWqcIODWv

Nigerians however berate NBC for not revoking the license of AIT after granting an interview to a man that seems to know so much about the bandits and shares so much sympathy with them.

This would come after NBC Suspended Channels TV For Speaking With IPOB representative and eventually Slammed with N5 Million Fine.

The Federal government had Proscribed IPOB who are seeking for freedom as terrorists while keeping mum at the Boko Haram and Bandits ravaging the country with terror.

However, another video had surfaced where the embattled cleric was heavily criticizing Buhari and seeking to apologize to Goodluck Jonathan.

In his words, “Buhari is full of mistakes of which people close to him are only using him as a political ladder.”

Please what went wrong with this man🤔🤔🤔🤔🤔 pic.twitter.com/cWRfGYvxZa

This is so contradictory many had said…

They've turned Nigeria into BANDITOCRACY, the government of the bandits, by the bandits and for the bandits.

Imagine I suddenly start defending ipob on tv? My fate would have been sealed! Yet they allow this man the luxury he enjoys and say people seek to overthrow his government! Actions and inactions like this will ruin @OfficialAPCNg forever !!!!

So why wasn't AIT banned for granting interview to a bandit leader? One Nigeria my ass