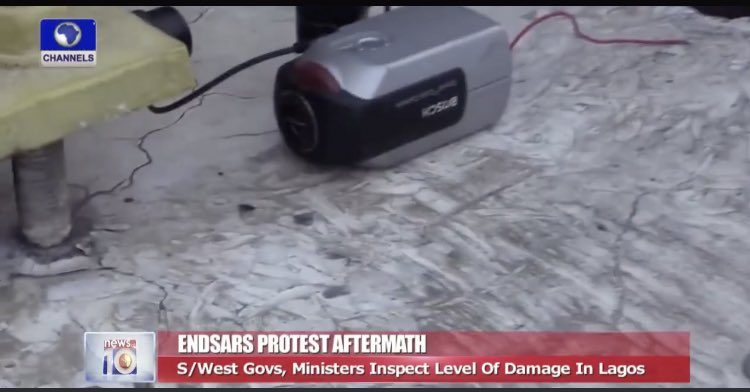 Babatunde Fashola, the former governor of lagos state and a minister in Buhari’s administration has reportedly discovered  a mystery camera at Lekki Toll Gate.

This event has raised a lot of dusts as most Nigerians marveled at such funny incidence as reported.

From our findings…. See tweets below..

Please before they come out and lie about the camera they found, notice the direction the lens is facing and notice that the lens is closed. Meaning that that camera was not in use at the time it was dropped, not when it was picked
#CCTV#EndSARS #EndPoliceBrutality#fashola #Fajr pic.twitter.com/WEXjQ9Wl5n

person wey fit tell you say snake swallow 36million fit tell you anything.. The camera was there for a purpose including those crew..

Immediately after Lekki Massacre:
•Sanwo Olu inspected the crime scene
•Arise TV reporters were there
•LAWMA has done a clean up
•Private volunteers have gone to clean

NOBODY found a camera.
Until Fashola came from Abuja.

Since Agent Fashola Reddington discovered the mysterious CCTV camera at Lekki Toll Gate, he should be deployed to Sambisa to uncover the perpetrators. A National Hero!🙌

I love Fashola ooo.. next time, daddy should look at the script very well before he acts. That’s a terrible acting. So no one saw that camera for days, not even lawma. Omo, they no rate us true true

Above are the few tweets to show you how poorly they rated Nigerians………. Such a poor scripts…..

The camera 📸 was even facing off the scene and lens covered before the agent discovered it…… And even used a handkerchief to extract it….. 😂

Finally, need i tell you that they have earmarked 1 Trillion naira to help rebuild the damages as a result of the protest…….

Let me do a little analysis so you understand the amount quoted….

“Assuming you use 100 Million to buy the BRT Buses burnt”

Another 100 million to rebuild the BRT terminals

All the banks burnt……. Another 500 Million naira

Helloooo……. All These quoted figures with intentional bloated amount have not amounted to 100 Billion naira..

Do you now understand the meaning of 1 Trillion naira….

Do have a nice camera discovery day ahead…..

Am i saying so many things weren’t damaged? Nope… But 1 Trillion budget earmarked………. I can’t say much more