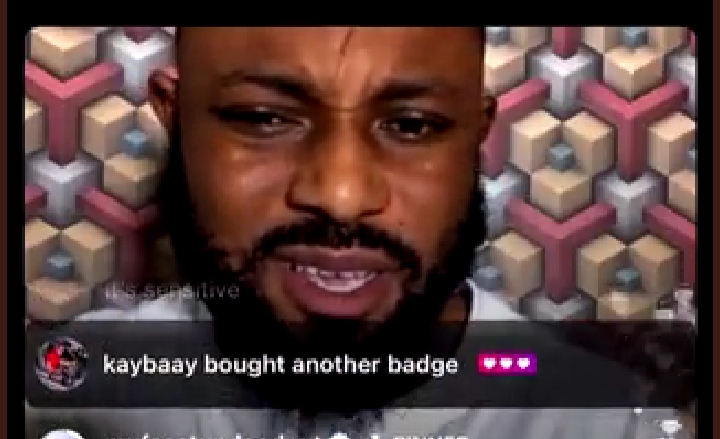 The husband of Tega, the embattled ex BBnaija housemate has granted a live interview to a social media influencer, Tunde Ednut on his live Instagram.

You’d recall that Tega was evicted on Sunday during the live eviction show alongside her lover-man, Boma.

Her actions with Boma during her time in the Biggie’s house infuriated most Nigerians such that they forgot that Buhari’s still their president and used their PVC to vote ❎ her out.

Jkcyno news also reported that Tega’s husband, a.k.a “daddy jamjam” earlier made a writeup stating he cheated on Tega on their matrimonial bed. Just as most Nigerians were still trying to get their heads around such news, Tega got evicted and emotions were quite high everywhere.

Below are the few highlights from the live interview.

Tunde asked him : what’s next between you and Tega, is the marriage still gona go on?

Tega’s husband : this is a very difficult question, very difficult. I am human, we’re all human. I believe we all sin, omoh, God dey forgive us. I think eeeh, if i do anything funny now, i do not know what’s gonna happen. I think the best thing to do, for us to do, i think she knows that what she did was totally bad but i think she needs us now more than ever.

I won’t throw her away, she’s my wife. This particular thing comes with marriage. No perfect marriage. I have never had issues with my marriage for the past 4 years. (guess he has forgotten what he wrote about him cheating on Tega on their matrimonial bed)…. “no wahala”.

So, if this should be our first issue, then i don’t think I should abandon her. She needs me, all we just need basically is for Nigerians to pray for us.

Read Also : Some Hilarious reactions as Biggie kicks out Boma and Tega (video) 1

Well, if she comes back and say i am very sorry, what I did was bad, i went out of my way, well, no problem, i will give her a second chance. But if she says what she did was ok, I would let her go, and move.

Tunde Ednut : well, what i’m gonna say is take heart, hopefully both of you get things resolved when she comes out, when you guys speak on the phone .

Tunde Ednut : Right now, how do you feel?

Tega’s husband : i feel 💔 broken, right now, i feel my whole ego has been tempered with. I feel so sad and terrible I won’t lie. I can’t even leave my house because, a lot of stories on the street. I feel terrible.

Tega’s husband : Tega has been a very very good, let’s forget this side of her, she has been a very very good girl. I was surprised when i saw what happened, i was like omoh, this no be my wife,no be Tega be dis, that’s not my wife. I have never seen this side of Tega, Tega is a God fearing woman. Never for one day disobeyed me or even…… Meeehn, this is a different Tega i’m seeing.

I’m really down, i’m broken. I want that Tega back not the Tega in Big Brother House.

The interview was cut short due to traffic jam on Tunde’s handle.

Meanwhile, see some reactions from people.

Why's this one granting tunde an interview? Na wa o

Both husband and wife are clout chasers.

This is unnecessary, Plus the man is lieing 😏

Through his teeth. What happened to i was the one that cheated first and put a strain on my marriage. Tega messed up
but this guy wants his own share of fame. They both deserve themselves.

Am i the only one who feels this is an act, not believable to say the least.

One thought on “#BBNaija2021 : Tega’s Husband seeks for prayers from Nigeria as he grant’s interview (video)”