Atiku Abubakar  has deleted a post he made on his Facebook page and Twitter about the murder of Deborah Samuel after coming under a barrage of threats from fanatics of northern origin who asked him to forget his presidential ambition.

Mr Atiku’s post around 10:20 p.m. Thursday was deleted less than an hour later. It had garnered over 1,200 reactions within 16 minutes, according to a screenshot taken by Peoples Gazette.

Most of the comments were from fundamentalists who warned the politician to stay away from condemning the murder of the Christian student.

“There can not be a justification for such gruesome murder. Deborah Yakubu was murdered, and all those behind her death must be brought to justice,” Mr Atiku said. “My condolences to her family and friends.”

A spokesman for Mr Abubkar did not return a request seeking comments about why he took down the post on Facebook. 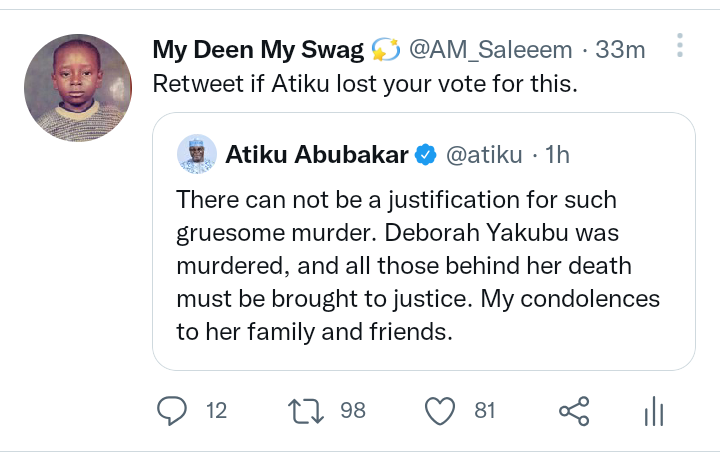 Remember this when @atiku starts acting brand new and liberal to seek your votes in the coming weeks. Don’t forget to add the fact that he stayed off twitter when Buhari banned twitter to his sins.

I told you it’ll be a political suicide for Atiku to condemn the barbarism in the open, I was right.🌚🌚 pic.twitter.com/YQmr9lVxAK

Is this the Man @OfficialPDPNig wants to Impose on us?

For someone who calls himself “The Unifier”, We have seen @Atiku does not stand for justice.

How do you expect a character like this to lead a Multi diverse country like Nigeria? pic.twitter.com/eGwfkSE1gf

So as not to offend awon the owner, Atiku deleted this tweet. 🚩🚩🚩🚩🚩🚩 pic.twitter.com/wKJV6hmjQQ

Did you change your mind about justice for Deborah?

Did you change your mind about offering your condolences?

Is it that you have now found justification for the gruesome murder? pic.twitter.com/J8E1ZhWT1K

You see, this is an own goal scored by Atiku and his media team…. It shows where he stands……. He chose his political ambition to humanity.

What on earth would justify withdrawal of a condemnation of a gruesome murder of a human being?

If the fanatics threaten not to vote him for standing for the truth, if he meant well for all inclusive Nigeria, he would have stood firm for the truth…

What did he do?… He preferred his Northern fanatics to humanity….. Karma is real though…. We watch!