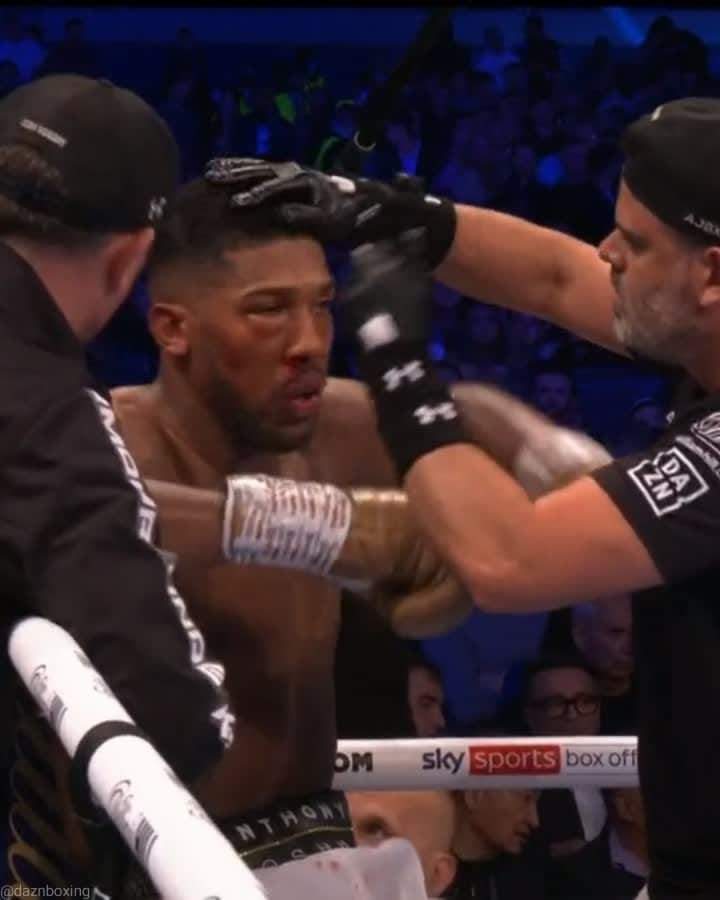 ANTHONY JOSHUA was taken to hospital with a suspected broken eye socket after his battering by Oleksandr Usyk.

And promoter Eddie Hearn revealed the deposed heavyweight champ could not see out of it after the ninth round of his heavy points defeat.

Joahua failed to make use of his 18lb weight advantage over former cruiserweight king Usyk, who landed a barrage of heavy southpaw shots throughout the bout at the Tottenham Hotspur stadium.

By the 10th round of a thrilling contest, AJ had a visible black and swollen eye as Usyk took control of the bout.

The Ukrainian finished with a flourish in the final rounds to put the result beyond doubt and seal a the unanimous 117-112, 116-112 and 115-113 verdict was announced at White Hart Lane.

Joshua was promptly escorted from the ring and taken to hospital for tests.

Hearn said afterwards: “He will go to hospital.

“I don’t know if he has broken his eye socket, it doesn’t look great.”

“He said he couldn’t see after the ninth round, obviously he was getting tagged a lot as well.

“His power looked like it had left him, the tank was empty and it was only heart which kept him on his feet in the 12th round.”

Hearn also said AJ would have a mandatory rematch and the Brit felt he already knew how he could beat Usyk next time around.

Hearn told BBC Radio 5 Live: “He is already talking about the rematch now.

“The first thing he said was ‘I know I can beat him, I know exactly what I have to do’.

“(He said that) back in the changing room just now. You talk about the rematch, but doing it is something very different.”

“Knowing AJ, knowing the position he is in, knowing that he will have a shot to get his belts back, there is absolutely nothing else he will do other than a rematch.”

Joshua later posted on Instagram: “Keep positive even if the world’s crumbling in front of you!

“London I love you & thank you each and every time!”

British former super-middleweight champion Carl Froch was a pundit for the fight and said the damage to AJ’s face looked significant but not serious.

Froch added he felt AJ had shown “too much respect” to Usyk whose head movement and ring craft were the key factors as Usyk claimed AJ’s heavyweight WBA, IBF and WBO belts.

Joshua ended the fight pinned to the ropes by a flurry of punches from Usyk who said afterwards he felt he could have knocked his opponent out.

The result is the latest obstacle to AJ finally facing fellow Brit Tyson Fury in a fight the boxing world have long wanted to see.

That showdown had already been derailed because the Gypsy King now has to fight American Deontay Wilder for a third time on October 9.

Say something good to Joshua, he needs our support now than bashing…. “Joshua nwannem ndo…”