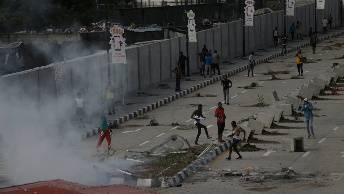 The Assistant Commissioner of Police (ACP, name withheld), who was shot on Friday in Benin, the Edo State capital, in the exchange of gunfire with cultists who engaged in supremacy battle, died Saturday at the University of Benin Teaching Hospital (UBTH).

The two other policemen, both Inspectors, who were also shot along with the ACP, were still receiving treatment at UBTH, but on danger list, with bodies littering the streets and roads of Benin and its environs

The Assistant Commissioner of Police (ACP, name withheld), who was shot on Friday in Benin, the Edo State capital, in the exchange of gunfire with cultists who engaged in supremacy battle, died Saturday at the University of Benin Teaching Hospital (UBTH).

The two other policemen, both Inspectors, who were also shot along with the ACP, were still receiving treatment at UBTH, but on danger list, with bodies littering the streets and roads of Benin and its environs.

The three policemen ran into an ambush by the rampaging Aiye and Vikings cult groups during rescue mission in the notorious Upper Sokponba and Murtala Mohammed Way axes of Benin.

Death of the ACP was confirmed in confidence Saturday evening through the telephone by a senior police Officer of Edo command.

The number of persons, both innocent residents and cultists, who lost their lives to the rival war between members of the two cult groups, rose to twenty eight, from Friday’s figure of eighteen, as the shootings and killings both at night and in broad daylight, still continued.

Read Also : Access bank Under serious backlash as Stanbic IBTC gets a nod

Our reporter gathered that policemen in Edo command were now receiving threat messages and calls from many of the fleeing 1,993 inmates, who escaped on October 19 from the Maximum Correctional Centre (White House) on Sapele Road and the Mèdium Correctional Centre on Airport Road, both in Benin, during the #EndSARS protests that were hijacked by hoodlums.

The threat calls and messages were mostly for policemen who investigated and prosecuted the convictions of the escapees.

It was also learnt that the sudden increase in the volume of illegal arms and ammunition in Edo state was as a result of the looting and razing of seven police stations in Edo on October 19, with large cache of arms and ammunition now in the hands of criminals, mostly the fleeing suspects in the cells of the burnt police stations and the escapees of the two correctional centres, mostly cultists, who immediately returned to crime.

Sadly, just Saturday, a medical practitioner, Dr. Maxwell Orosanye, working for the Edo state government-owned Central Hospital, Benin, was shot by the rampaging gunmen, suspected to be cultists, and he was still receiving treatment in an undisclosed hospital in Edo.

Orosanye was shot near Mobil filling station on Siluko Road, Benin, while his Toyota Corolla saloon car was snatched at gunpoint.

Moving round the hot spots in Benin, especially Upper Sokponba, Siluko, Ibivwe, Uselu, Isihor, Iguosa and Ugbowo, hosting the Federal Government-owned University of Benin (UNIBEN), Saturday evening, revealed that the residents were living in fear and mostly remained indoors to avoid being hit by stray bullets, with night life disappearing.

The cultists were still looking for rivals to kill, while searching from house to house, without any challenge, in spite of the heavy deployment of soldiers in Benin and its environs.

The cultists were still openly brandishing AK-47 rifles, machetes, battle axes, broken bottles, clubs and other dangerous weapons in broad daylight, while always shooting sporadically throughout the night, thereby heightening tension in Benin and its environs.

Edo Commissiiner of Police, Babatunde Kokumo, through the telephone Saturday, insisted that officers and men of the command were working within existing limitations to restore normalcy to the state, while assuring that all the criminals would soon be arrested and prosecuted, to serve as a deterrent to others.

Kokumo said: “Just imagine what it means that three police stations along Sokponba Road, Benin were destroyed and burnt, patrol vehicles were destroyed in many other parts of Edo State. All the officers and men in the burnt police stations now operate from the state police headquarters (in Government Reservation Area, GRA, Benin).

“The peaceful #EndSARS protests were hijacked by hoodlums. The protests took a violent turn in Edo State, with inmates of the two correctional centres in Benin City set free. So, what do you expect?

“Some of the escapees have been sending threat messages to policemen, who investigated and prosecuted them. One of the escapees, who was convicted for murder, went that same day (October 19 this year) and he killed the prosecution witness in his village, but he was immediately rearrested.

“Everybody must be part of the restoration of sanity to Edo State. People who know the escapees should avail us information about them. I am assuring you that we are not sleeping, but with what has happened to the police in Edo State, some of these hitches are expected, but we are not sleeping and we will continue to work.

“As I speak to you, I am on my way to visit three of our personnel: an ACP and two Inspectors, who were shot and they are recuperating.”

Edo police commissioner also urged residents of the Southsouth state not to panic, but to go about their lawful businesses, while assuring of adequate protection of lives and property.

One thought on “ACP Killed, 28 Confirmed Dead In Bloody Clash In Edo”