Seyitan Babatayo, the lady who accused singer Oladapo Daniel Oyebanjo, popularly known as D’banj of rape, has formally filed a criminal complaint against the music star.

In a press statement released by Babatayo on Wednesday morning, detailing the timeline of events since she came out with her story, she revealed that she has filed a complaint at the Gender Desk of the Nigerian Police Force Lagos, Police Command Headquarters, Ikeja Lagos.

Recall we reported that Heritage bank reportedly Suspended  D’Banj Over rape case early this month as Seyitan accused D’Banj of forcing his way into her hotel room and raping her in 2018.

In the statement, she confirmed that she was indeed arrested on Tuesday, June 16, and taken to the IGP IRT office in Harold Shodipo, Ikeja where she was detained.

Seyitan revealed that she had tried to give a detailed account of her experience at Bar Beach Police Station in Victoria Island, Lagos on Saturday, June 6. “That attempt was thwarted by an officer of the law at the said Police barracks,” she said in the statement.

Read Also : Painful as D’banj loses Only Son in the most tragic way

She also reveals that she was on Tuesday, June 16 arrested by four armed police officers who gained entry into her home pretending to be a delivery agent.

“I spent almost 48 hours at the Police Station, without being charged for a single crime. When I requested to know the reason for the police detention, the police refused to answer, but they continued to treat me like a criminal,” she said.

She revealed that D’banj through his team harassed and threatened her, took hold of her social media accounts and forced her to say that the allegation was a publicity stunt.

“18th June 2020: I was isolated from my family, coerced, pressured and intimidated in person by D’banj and his team to retract all statements and to announce that my testimony was a publicity stunt.”

She disclosed that her mother, lawyer, and friends couldn’t reach her until activists swung into action and tracked her using satellite mapping.

Seyitan insists that at the time she came out, she only asked for an apology through her lawyers, that she isn’t after financial gain.

She appreciated everyone who stood by her and asked for time to heal, as she’s still dealing with the effects of the situation and its aftermath, adding that no one should be subjected to what she has been through.

“I’m yet to come to terms with the fact that my fundamental human rights were stolen from me. Nobody should have the right to use their name or status to intimidate survivors who speak out or to tamper with justice,” she said. 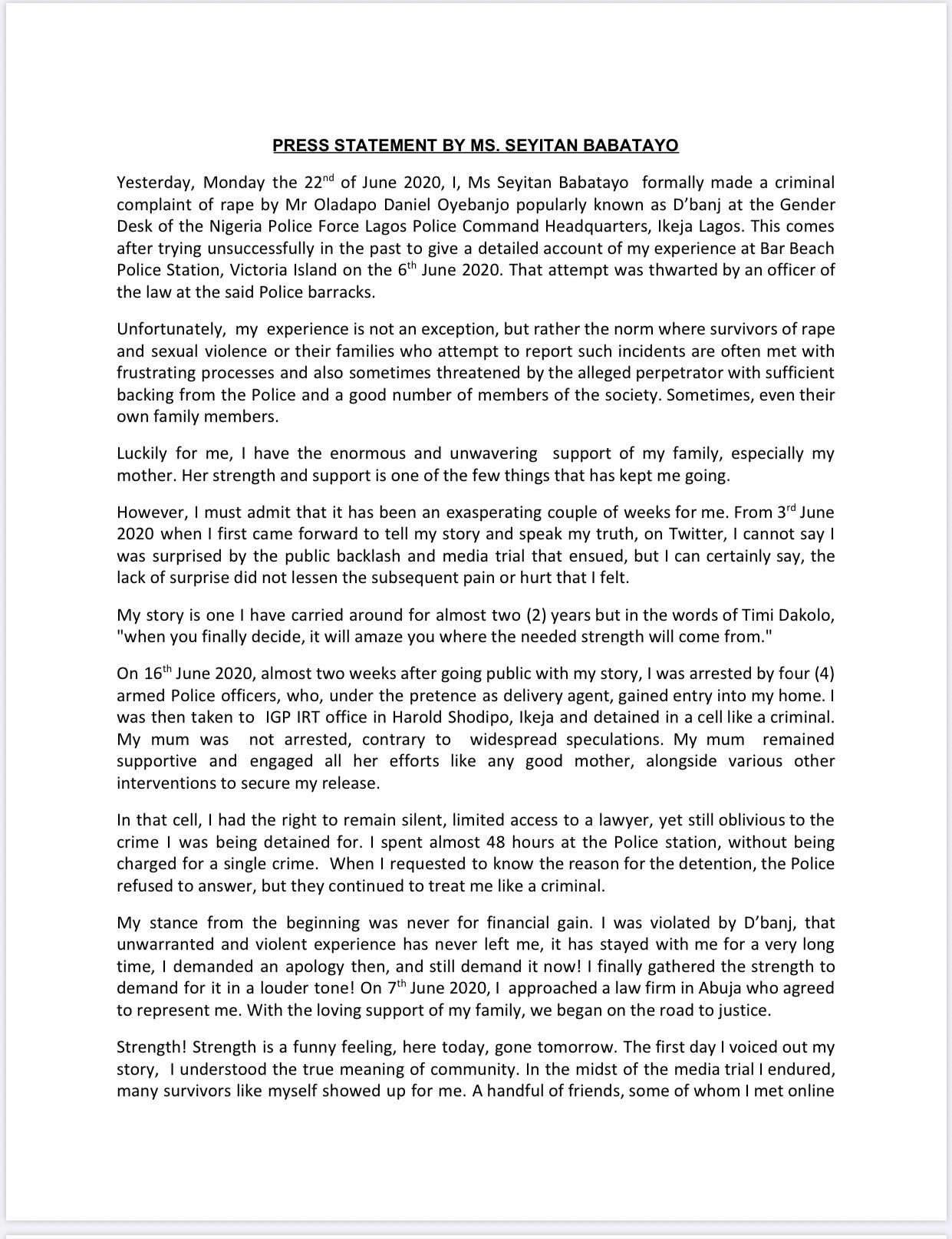 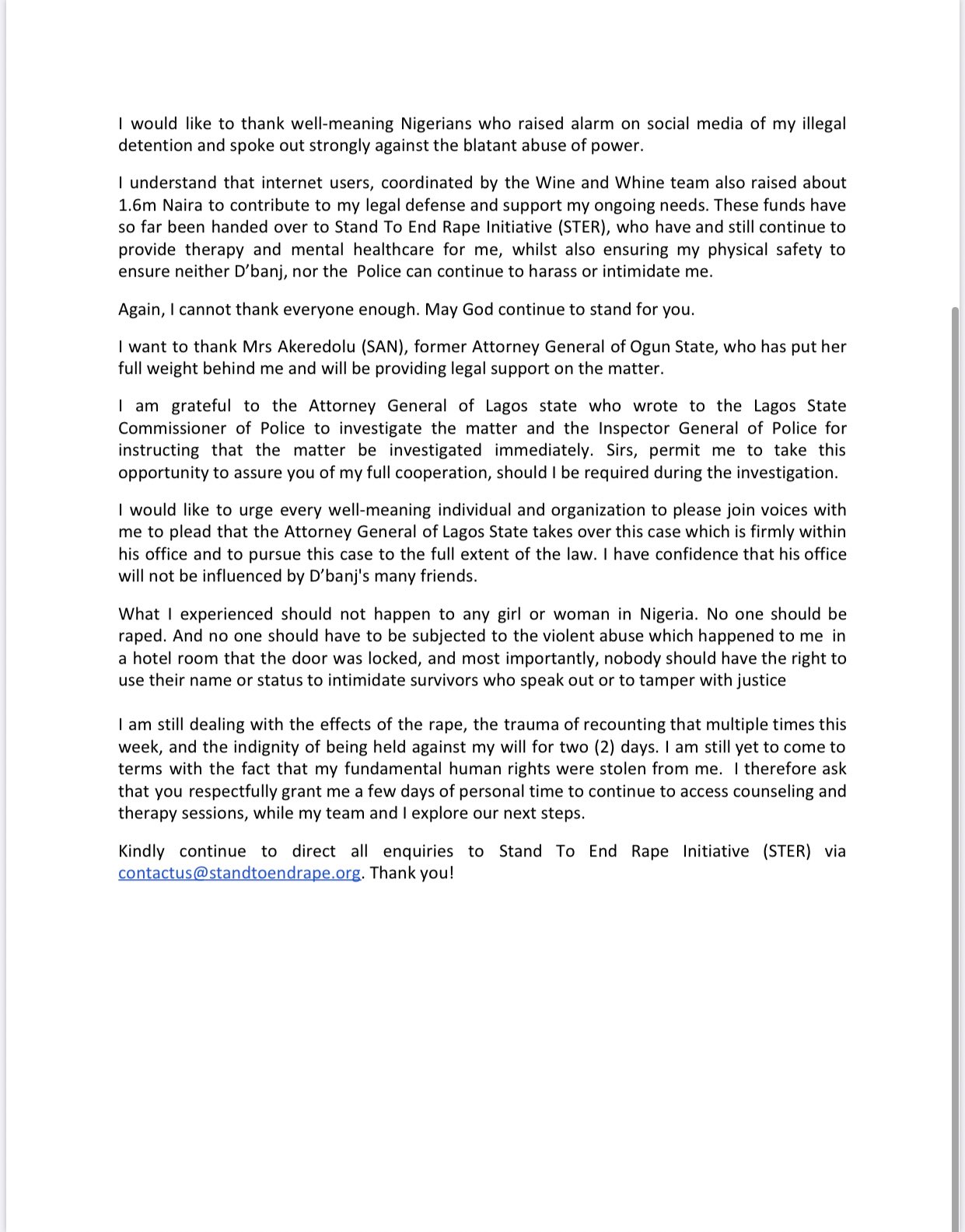 As expected, Nigerians have taken to social media to react to the new development.

See some of the reactions below;

The news lately has been so hard to read, but we must never support the oppressing or silencing of victims by the Police. If Dbanj truly was being falsely accused, then a "defamation of character" lawsuit was the right move – but that's where it should have stopped (1)

Whether it was overzealous police officers/Dbanj/his handlers that orchestrated it – locking Seyitan and/or her Mom in jail, seizing her phone, preventing her from reaching her lawyers/family etc is completely wrong – and I hope Dbanj will denounce it himself. (2)

We all saw the vid that showed a sitting Senator physically assaulting a woman & then having her arrested. Victims will never speak up against oppression if we allow the system to silence them. Civil cases must be decided by the courts, never by the abuse of the Police Force (3)