#BBNaija : Finally, it has come to an end and the winner is set to emerge.

The show Kickstarted with Seyi evicted from the show

We are going to miss your hilarious diary sessions, please start a YT vlog or something 😢https://t.co/QiY7Jsx8Xp#BBNaija #BBNaijaFinale pic.twitter.com/Q2h4w6lx9R

The slow Tiger, Frodd was evicted from the show….

Mr. Fresh and Odd feels the House was challenged by his personality and he has BIG plans for Esther 👀 #BBNaija #BBNaijaFinale https://t.co/Pta0eM83i6 pic.twitter.com/u5TjrF9GSV

Yaass, a big win for Mike as he goes home tonight as the @Bet9jaOfficial Arena Games champion of this #BBNaija Season. Any surprises here? Mike definitely earned it! #BBNaijaFinale pic.twitter.com/TmVMoOeKeo

Seyi won the “ONE” campaign debate show to emerge as the representative of the organization In New York, USA 🇺🇸.

The prize was presented by the former winner, Bisola alongside, Waje.

At the end of the show, Mercy becomes the first female to win the BBNaija show…congratulations Mercy Lambo….

Meanwhile, Big brother raked in 50M voters during the last week and reportedly made 87 Billion naira in revenue.

Big brother made 8.7billion naira from the poverty capital of the world? #BBNaijaFinale pic.twitter.com/z9xJu5c92U

See how how the fans Voted…. 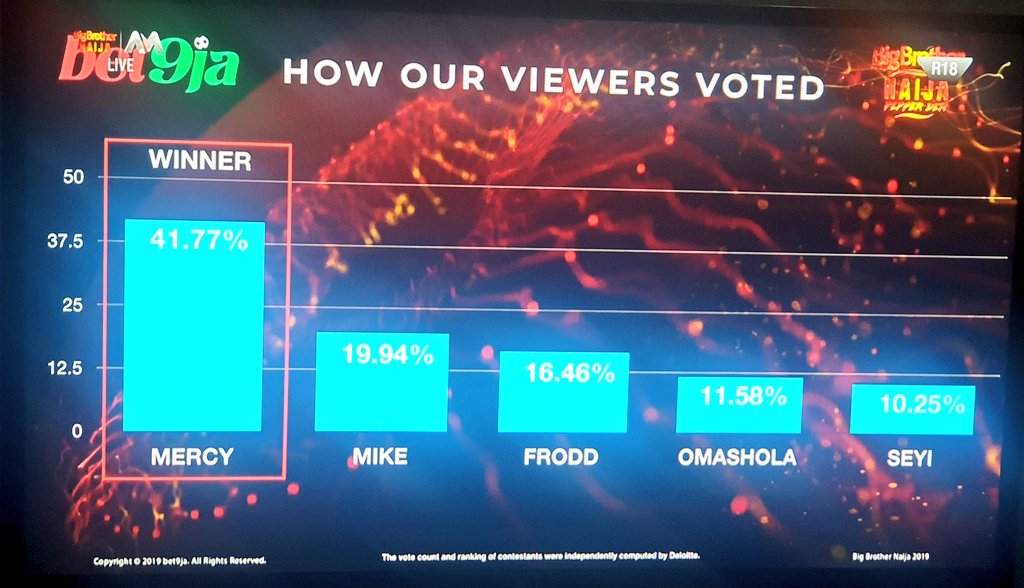