#BBNaija : In the Arena this morning, Tacha flared up at Mike for cheering her on after being punished by the instructor. However little the issue appeared, it attracted reactions from other concerned Housemates.

Trust instructor Obinna to come through with rigorous exercise that will enable Housemates to burn out the fats their bodies have begun to attract as a result of their excessive eating habit. They did not expect the morning workout to be so tough. So when he said that he would punish the last person to get up from the exercise, they did not believe it. Being that last person, Tacha was asked to do some more exercise. Mike felt he needed to encourage her and started cheering her on. Little did we expect this to turn into a fight. Enraged and feeling like Mike was making fun of her, Tacha told him to stop it, that she didn’t need his encouragement.

When we had thought that it would end there, Tachawas seen in the lounge telling Mike, “keep your stupid cheering up to yourself and other persons.” Mike, on the other hand, couldn’t understand why on earth anyone would find cheering unacceptable. Afterwards, he was in the garden explaining to Frodd and Esther that he had not crossed his boundary with his action. 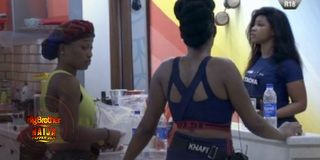 On her own part, Esther felt that Mike should have minded his business. She said, “You know for sure that she does not like it. You can’t say you don’t know.” But for Mike, that someone would reject some encouragement done out of love was unimaginable. He replied Esther saying, “I am encouraging her, the workout is hard.” Angry at Mike’s remark, Esther said that despite knowing that Tacha did not like being cheered, he went ahead. “This conversation is pointless,” she concluded and walked away. Even Seyi felt that Mike went too far for replying Esther that he didn’t care. The matter did not end there, Omashola had his own opinion when he told Ike and Elozonam that, “this is the first tim in my 39 years of age, seeing cheering being offensive.” What was even more surprising was the conversation that ensued between Esther and Mike later in the bedroom. Mike wondered why Esther was defending her, a statement which got her irritated further. She said that Mike was used to doing that to others. “Respect her decision. It’s that simple,” she told him. 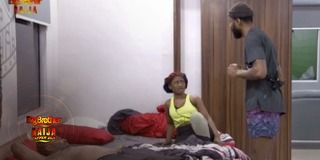 Though the issue was between Tacha and Mike, Esther seemed to have got a perfect time to express her own opinion about the resident peacemaker. Will it stop here or will Mike mind his business going forward?